Crazy Dumplings is the holy grail of dumplings.

..this is definitely not your average cookbook. The cookbook includes traditional dumpling recipes and the not so traditional… And with recipes like honey pear duck dumplings, fancy lobster dumplings, cherry pie dumplings, cheesecake dumplings and so much more. … there is a dumpling in this cookbook for everyone.

So whether you like it hot or spicy… or sweet and savory…with detailed instructions, easy accessible ingredients, this cookbook will definitely help you impress that special someone…And make you the master of the Kitchen…leaving nothing to the imagination. Here’s a few recipe’s to get you started, now the rest is up to you. Basic Dumpling Wrappers
3/4 cups flour
1/3 cup boiling water
Dash of salt
Flour for dusting
1. Mix flour and salt together in a mixing bowl.
2. Drizzle in water, mixing with a chopstick or fork.
3. Leave in bowl, covered with plastic wrap for 15 minutes.
4. Gather dough up into a ball and kneed on counter for a minute or two (until the dough is
smooth)
5. Pinch off small portion of dough and roll into a ball (about 1 inch in diameter). Roll out into a
flat circle on the counter, dusting with flour to keep dough from sticking.
6. Put small amount of preferred dumpling stuffing mixture into the middle of the flat
dumpling wrapper. Pinch the dumpling closed.
7. Cook dumplings.
a. To fry dumpling, preheat oil for 30 second then lower heat. Cook dumpling on each
side for only about one minute or until golden brown.
b. To steam dumplings, place in a steamer or on an elevated plate in a wok over water
for about 10 minutes.
c. To boil dumplings, place in boiling water for about 5 minutes.
8. Always cut a dumpling open to make sure it cooked through.
9. Serve 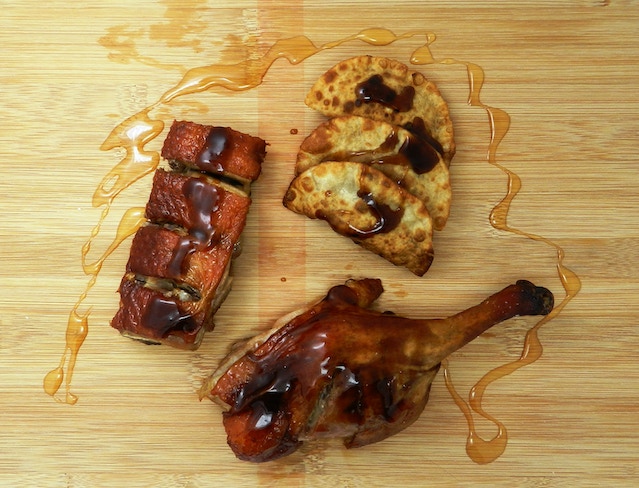 1.Mix oyster sauce/hoisin sauce, honey, and Chinese 5 spice powder together. Set aside.
2.Rinse off duck with cold water and pat dry with a paper towel. Slather with half of the sauce mixture.
3.Place duck on a oven pan (if the duck has skin, place it skin side up) and bake at 450 degrees fahrenheit (250 degrees celsius) for thirty minutes.
4.When the duck is done, mince the meat, including the skin. Chop the cucumber and the green onion. Mix the duck meat, cucumber, green onion, and 1 tablespoon of the sauce mix together.
5.Spoon mixture into dumpling wrappers and pinch closed.
6.To fry dumplings, preheat oil for 30 second on high heat, then lower heat to medium. Cook dumplings on each side for about 3 minutes or until golden brown.
Serve hot with remaining sauce mixture.

About the Author Amanda Roberts

Amanda Roberts is an American writer, editor, and teacher who has lived in China since 2010. She has an MA in English and has published books, short stories, articles, poems, and essays in publications all over the world. She blogs about her life in China at TwoAmericansinChina.com and also heads the Women Writers of Shenzhen writers circle. She can be found all over the internet. Website: http://www.twoamericansinchina.com/ Facebook: https://www.facebook.com/TwoAmericansinChina Twitter: https://twitter.com/2americanschina Pinterest: http://www.pinterest.com/amandachina/crazy-dumplings/ Email: twoamericansinchina@gmail.com