Throwback Thursday “Fifty Shades of Gray” Review:The Movie, The Books, and The Soundtrack

Say what you want about the Fifty Shades of Grey Trilogy, there are over 100 million people who purchased these books. I on the other hand reviewed The Fifty Shades trilogy, which was developed from a Twilight fan fiction series titled “Master of the Universe” . I think the Fifty Shades Trilogy is quite entertaining, and all though I gave them a high-ranking, I ripped the front and back covers off

because I didn’t want anyone to know that I was reading it…And I never looked back.

There’s been a lot of talk about the content of E.L. James’ Fifty Shades of Grey Trilogy and all I have to say is…if it’s not your cup of tea don’t drink it. Now this does not mean I support sexual violence…it means I support a writer’s right to exercise her healthy imagination on paper…and skip and sing all the way to the bank in the process. However, In January 2015, the National Center on Sexual Exploitation called for a boycott of the film, claiming that it was  really about sexual violence and sexual abuse.

Now here’s where things get a little tricky, when reading a book your mind auditions and places various people in the roles of the characters of the books. You determine how severe your ride will be on the emotional rollercoaster of your book. Now I didn’t run out on opening night to see this movie, I actually took my sweet time watching this movie, and like I said I don’t support sexual violence.  However, this movie is not really about sexual violence or sexual abuse, it’s about emotional abuse…And sex is the weapon of choice.

In this case, sex was not used as a healthy exploration of two willing adults in a relationship trying to get closer…the key word…relationship. Sex in this case was used as a weapon, a weapon in an exploration of a non-relationship where one is in love with the other, and the other is love with himself. To say this movie left me a little disturb would be an understatement… but not for the reasons you think. This movie was definitely a conversation starter…it had some interesting

parts…an other parts that just made me say…hmmm…alrighty then…let’s move along.

However, let’s start a conversation… To often women confuse having a sexual partner… for having a partner. The only message I think this movie was sending was…Dads please set the tone on how your daughter should expect to be treated by a man. And moms…lead by an example and set the tone on how your daughters feels about their mind, body, and spirit.  This movie was not about sexual positions or sexual brutality…it was about emotional abuse of a girl searching for her self-worth  through the eyes of a man.

The Lesson…The Moral of this story…No matter how much you love or care about a person, as long as you let your self-worth be calculated by another person, you will always be short-changed.  Trust is something that is earned and should not be giving away freely, and even those who earn your trust with the kindest of hearts and the best of  intentions can also fall prey to human nature. You know what I’m talking about, that one human flaw that seems to take down the best of us…the disease called “drunk with power”.  Remember, even Lucifer aka Satan was once an Angel.

The scene that really struck a chord with me, is the scene where she’s crying and upset and can’t tell anyone why.  This is a perfect example for our young women out there on why relationships that start in the darkness of the night will never survive the light of the dawn. You can’t make a non-relationship into a relationship where the only common denominator is sex…call it what is was…and move on.

Now here’s something  I didn’t take my sweet time doing…listening to this amazing…I mean…AMAZING soundtrack for this movie. It is actually one of the best movie soundtrack I’ve heard in a long…long time. With a compilation of new and old songs, there is something here for everybody. This is the kind of music soundtrack that kids years from now will say, my mom and dad conceived me the night they were listening to your cd. Let’s just be honest… this cd is for the grown and sexy. WARNING: you and your honey bear might not want to be stuck at home in a blizzard with this cd…or may you do…

But whether you do, or you don’t, this music cd is definitely an appetizer to the main course…the book.

Don’t get me wrong…I think this movie was okay… not great… but okay.
For me what determines if I’m going to like a movie is the first 15 minutes, and for the first 15 minutes I felt like I was watching a Batman Movie, I kept waiting for Bruce Wayne to put on his Batman costume.  I know, I know, but it’s true. The premise of a girl walking into an office of one of the most powerful man, frumpy and disheveled with all these beautiful and well groom women walking around the office just made this story a little bit unbelievable from the moment it started…sorry. Besides this seems like déjà vu…Where did I see this scene before of the frumpy girl walking into the office of the high power executive making a fool of herself…and then… finally getting that makeover that turns her into hotness…oh yeah… “The Devil Wears Prada.” 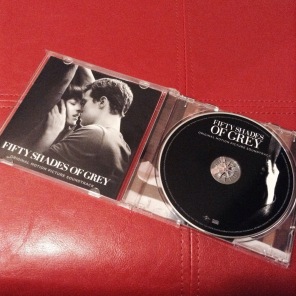 Of course, there were no bedroom play dates in Devil Wears Prada, but for that movie the entire transformation works. As for this movie, it just seem like a little girl playing an adult game without really knowing the rules.  This movie definitely did not live up to my expectations, and definitely did not do the trilogy justice.  However, I can’t help but think…if I never read the The Fifty Shades of Grey Trilogy…And if it wasn’t for the endless promotions… I might have enjoyed the movie for what it was, instead of what everyone expected it to be.

So inclusion I will end this blog post by saying, if you and your sweetie want to watch a movie on Saturday night and maybe have an interesting conversation, then by all means check out “Fifty Shades of Grey,” I think it’s an interesting movie to say the least. If you want to get all hot and bother on a Saturday night with your sweetie, then lock the door, place the Fifty shades of Gray Music Soundtrack in the cd player and…push play.